From Jerripedia
Jump to: navigation, search 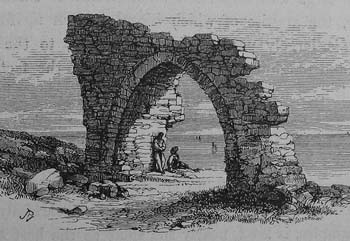 The castle may have been built on the orders of Warden of the Isles Sir John des Roches and was probably intended as a refuge for islanders if the French invaded, but they would never have withstood a siege because the nearest source of water was some 200 metres away.

The walls were built from granite and are thickest on the landward side, because on the three other sides it is protected by steep cliffs some 60 metres high. The perimeter wall was about 250 metres long and enclosed an area roughly circular in shape. Archaeological excavations of the ditch which was spanned by a drawbridge revealed 12 carved corbels.

The gatehouse, which is substantially all that remains, was protected by the drawbridge and portcullis and would have been very difficult to capture.

The castle - really just a 'fort-of-refuge' due to lack of an internal water-supply - is said to have been twice captured by the French, in 1373 and 1381 - and it is surmised that it was perhaps demolished around the time of the French occupation of Jersey (1461–1468). Archaeologists who have studied the ruins suggest that the castle was deliberately destroyed, rather than left to crumble over time.

The following scenario has been put forward by one researcher:

"Some of its stone was used to enlarge St Ouen's Manor and perhaps build other properties in the area. The then Seigneur, Phillipe De Carteret, was already short of money, because his guardians had looted his estates while he was a minor, and when he came of age and got control of his own estates, it was recorded that 'alder trees grew in the roofless hall of his manor'.

"Rebuilding his manor house was a costly project, and he did not have any money after the theft of his inheritance by his guardians. Jersey was still being subjected to raids by Norman and Breton freebooters until the 1482 Papal 'Bull of Neutrality' put a stop to them. The raids affected the prosperity of the whole of Jersey, certainly including the Seigneur De Carteret, - who had begun petitioning Edward IV (by way of Governor Harliston) for a "License to Crenelate" [ie fortify] his manor against such raiders as early as 1478. The license was eventually granted in 1484, giving permission to demolish Grosnez Castle to obtain stone for the purpose. The fortified walls and the towers and gatehouse of St Ouen's Manor would have absorbed all the stone produced by dismantling the fort of refuge at Grosnez, and more."

In 1806, a naval signal station was established at Grosnez to send messages to Guernsey.

From The Bailiwick of Jersey by George Balleine

The name may, of course, simply mean "the Big Nose". But nes was Old Norse for "headland", and the Vikings gave this name to many of the promontories they passed. In England are Skegness, Sheerness, Shoeburyness, Dungeness, etc; in Northern France Gris Nez Blanc Nez, Nez de Jobourg, etc, as well as the Gros Nez near Flamanville. So Jersey's Rougenez, Nez du Guet, etc, probably have the same origin.

Grotness, in Shetland, is derived from Old Norse grjot, a rock, and this may have been the original name of our Grosnez, Grotnes, the Rocky Point, which Jersey later gallicised into its present spelling.

Grosnez forms the north-west corner of Jersey. From it can be seen on a clear day all the other Channel Islands, including Alderney. The most prominent thing on the point is a gaunt ruined castle. A space of almost an acre was once enclosed by a roughly circular wall. On three sides - west, north, and east - it was protected by precipitous cliffs; so there the wall was lower; but on the landward side it is even today 16 feet high, and once was higher. The gatehouse had a portcullis and battlemented roof, and on either side two projecting bastions with arrow-slits, through which archers could shoot down anyone who approached the gate. In front of this was a broad ditch cut through the solid rock, which was not easy to cross unless the drawbridge was down. Inside the walls can be traced the foundations of groups of small houses or shelters. A collection of carved corbels from the castle is preserved at the Museum. 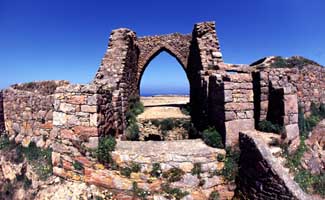 This castle has little history. In Leland's map of the Channel Islands, published about 1540, it is marked as Grosnes Castrum dirutum (Grosnez Castle, destroyed). In 1607 the Attorney-General challenged the right of the seigneur of St Ouen to hold his feudal court there, on the ground that all castles belong to the king; but the Commissioners ruled that, as it was "but a heap of rubbysh and stones", the seigneur might be left in possession. 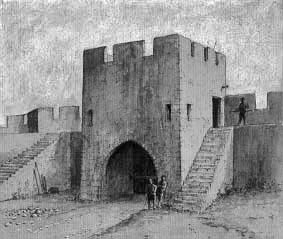 In his The Bailiwick of Jersey, 20th century historian George Balleine suggests that 'four facts about the castle seem certain':

"The 14th century was the period of the Hundred Years War, when the French were making constant tip-and-run raids on the Island. The castle was probably a refuge to which St Ouen farmers hurried their wives and cattle whenever the church bells gave warning that the French had landed. Then they could man the walls and hold the enemy at bay, knowing that they would not settle down to a long, systematic siege. *But when we ask who destroyed the castle, we can only guess*. * Guess? Not any more, Philipe De carteret demolished Grosnez to fortify St Ouen's manor just as his descendent, the Lieut-Governor, demolished St. germanyne Castel to use the stone in the building of Elizabeth castle in the 17th century.]

"In the account of du Guesclin's raid in 1373 the Duke of Bourbon's standard-bearer reports: "We arrived in Jersey, where there are two castles. The Duke and his men set themselves in array against one and the Constable and his men against the other."

"We know that du Guesclin attacked Mont Orgueil. What can the other castle have been if it were not Grosnez? "Next morning they attacked, and the Duke captured his castle, the first to enter being Barberie, the Duke's carver. The Duke then joined the Constable, who had not yet taken the other castle." Placenames sometimes preserve facts that history has forgotten. 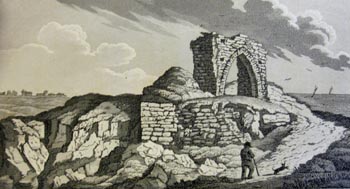 "A gully on the north-west of the castle is called Creux aux Francais. Does this imply that the Duke, instead of a frontal attack, led his men round to the back of the castle and stormed it at its weakest point? We cannot say. But its capture by the Duke of Bourbon is one possible date for its destruction. Before rejoining du Guesclin, he may have made certain that Grosnez could give no further trouble.

"Or was it destroyed in the French Occupation of 1461-68, during the Wars of the Roses? The de Carterets favoured the White Rose; so when the Red Rose won, their castle may have been dismantled. And this may explain why the Jersey chronicler never mentions Grosnez. Writing in the reign of Elizabeth, who was proud of her Lancastrian blood, he would not wish to call attention to the fact that his heroes, the de Carterets, had been on the other side. The flight of steps to the right of the arch was put there by the Societe Jersiaise to prevent visitors from damaging the moat by climbing over it.

"In recent years a lighthouse has been built half way down the cliff to guide ships coming from the Race of Alderney round the dangerous Paternoster Reef. It is worth descending to the platform of this lighthouse for the sake of the view along the coast."

This is the description of the castle in the 2020 Jersey Heritage Historic Environment Record:

"A 14th century fortification site of exceptional significance to the history of Jersey. The understanding of the site and its history is limited due to the lack of any recent documentary or archaeological research. Research into the castle's history was carried out as far back as 1897 (Le Cornu) and more recently in 1926 (Rybot). The archaeology, both structural and below ground, holds a great deal of evidence.

"Grosnez Castle is a fortified stronghold thought to have been built around 1330 on the orders of the Warden of the Isles, Sir John des Roches, to serve as a refuge from French attack for islanders in this part of Jersey. The 14th century was the period of the Hundred Years' War, when the French were making constant tip-and-run raids on the Island. The castle was twice captured by the French, in 1373 and 1381.

"The castle is said to have been captured by a French force led by the Duke of Bourbon in July 1373 in conjunction with an attack on Mont Orgueil by Bertrand du Guesclin. In the account of du Guesclin's raid in 1373 the Duke of Bourbon's standard-bearer reports: 'We arrived in Jersey, where there are two castles. The Duke and his men set themselves in array against one and the Constable and his men against the other.' It was captured again in 1381, and is thought to become a ruin around the time of the French occupation of Jersey (1461-1468).

"Local tradition has it that much of the stone was used to enlarge St Ouen's Manor around 1483, and that locals also took down the castle deliberately and used the stones on their own land. It is unlikely the seigneur of St Ouen would have been given such permission if the castle was still in use. On Leland's map of the Channel Islands, published about 1540, it is marked as Grosnes Castrum, dirutum (Grosnez Castle, destroyed). In 1607 the Attorney-General challenged the right of the seigneur of St Ouen to hold his feudal court there, on the grounds that all castles belong to the king; but the Commissioners ruled that, as it was 'but a heap of rubbysh and stones', the seigneur might be left in possession.

"A ruined fortified circular stone enclosure with a gatehouse, curtain walls and rock cut ditch, with traces of simple buildings to the interior. The granite curtain wall is about 250 metres long and encloses an area roughly circular in shape. The walls are thickest on the landward (south) side - the other sides (north, east and west) being protected by natural steep cliffs some 60 metres high. The most substantial standing structure is the gatehouse, which was protected by a drawbridge and portcullis. There is a portcullis groove descending to passage level, and below the groove is a pit for a counterpoise type drawbridge.

"Flanking the gatehouse are two D-shaped towers (now reduced to about 2m high). The west tower has remains of two arrow slits at ground level. Between the gatehouse and the east tower is a ramp up to the former wall-walk. There are two other towers further around on the east and west sides, but beyond them the natural defences presumably made flanking towers unnecessary. In front of the gatehouse is a broad ditch cut through the solid rock, originally crossed by the drawbridge. Archaeological excavations of the ditch revealed 12 carved corbels from the gatehouse (now on display at La Hougue Bie Museum). Inside the walls can be traced the foundations of groups of modest structures." 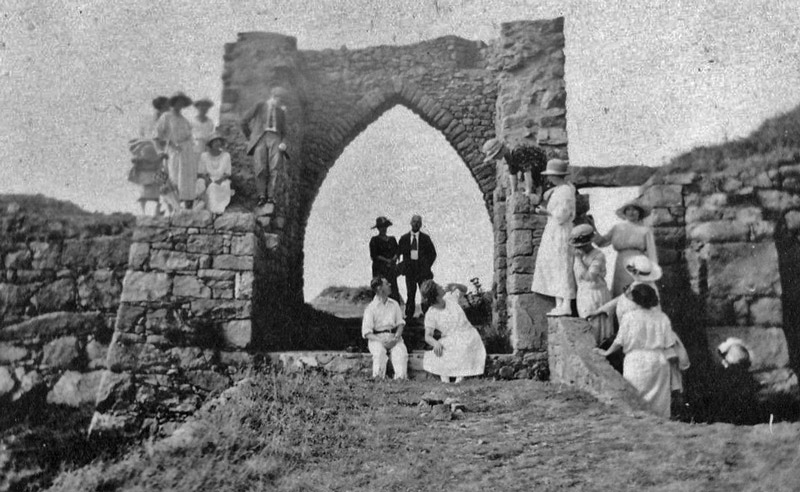 This delightful picture of the entrance to the ruined castle was taken in 1923. Apart from that, we regret that we have no further information ...

Please support Jerripedia with a donation to our hosting costs